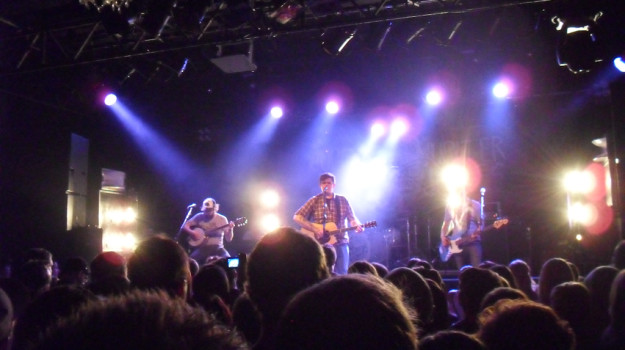 First concert for this year took place yesterday evening in the Batschkapp in Frankfurt. After a really long time a German band again. Jupiter Jones, supported by My Glorious (Austria).

The support band entered the stage at nine pm and they way they started sounded very promising. The first 30 seconds were from the direction like Rage Against the Machine and I was like „wow….this is going to be awesome!“ It turned out that I was mislead by the impressive start. All songs of My Glorious seem to be longer than 5 minutes and they all start off quite awesome with a lot of pressure and then there comes a absolutely boring and slow bridge, followed by a good verse and again a boring chorus. I was really disappointed after the first song and more or less pissed after the third as it became obvious that all songs would turn out the same way. What a pity, because if they could stick to the pressure from the beginning of their songs they could be really great!

I must admit that I left the hall again until the support act was finished. Enough to hear them from outside, no need to stay inside as it was really warm (sold out) and tight in there. So I returned after the support (and they played like 40 min) was finished and finally at 22.00 pm or round about Jupiter Jones entered the stage. I hadn’t seen them live so far, except for the singer, who was on stage with Hot Water Music in Trier and had proved to be really good live.

The whole show was a good mix from all the songs, sure with a focus on the new record (which is absolutely normal and fine for me) and the interaction with the audience was really good. Great live performance and the ability to keep the contact with the audience isn’t really that common, especially for German bands and so the Jupiter Jones show turned out to be really awesome. Fun and a perfect start for the live shows 2011.

I probably would go for another concert as they do a major tour in October, but buying the tickets has to wait until the dates of the Revival Tour from Chuck Ragan have been set as this has priority one and afterwards I hope I get the chance to see them in October in Mainz again.