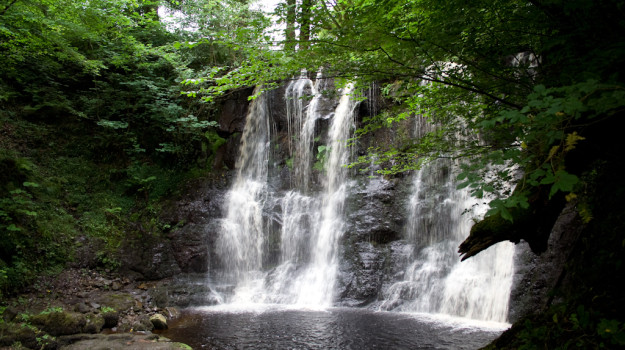 After a great breakfast we started from Cushendall to Glenariff Forest Park. By that way we walked through the Glenariff and Astrid told us that there are nine Glens of Antrim that have there origin in glaciers that were the reason for the nine glens.Their names are Glentaisie, Glenshesk, Glendun, Glencorp, Glenaan, Glenballyearnon, Glenariff, Glencloy [&] Glenarm.

The path through the glen was mainly covered by kneehigh meadow, thistles and a huge amount of horse flies as we were walking along a small river. I was more or less occupied by keeping them off the whole time. When we finally came to the entrance of the Glenariff Forest Park we were lucky to get rid of those beasts and were all pretty much amused by the entrance singboard saying „you are now entering a stressfree zone“. This was pretty much the truth if we thought about the horse flies … Shortly after that sign there was a pub where we had lunch outside in the sun and were more or less relaxing. Certainly, when we entered the park it started to rain a little bit, even if an Irish would never use this word as it was more or less only small drops now and then and we were putting rain clothes on and off all the time.

The park itself reaches the borders of the Antrim Mountains and so we had some hiking to do but it were maximum 500 difference in altitude, so practicable for everyone. In the park there are several waterfalls and in July we had the great possibility of finding blueberries everywhere along the track which was a great dessert. The tour itself had about 20km when I remember that right and was very nice, if you don’t recall the flies.

We finished our park visit about 4 p.m and returned to that pub on the entrance. Here we sat down with a cider or beer and waited for the transfer shuttle back to Cushendall. As we were pretty soon in the hotel that day we had the possibility to go shopping until we met again for dinner. This time after dinner we gathered all the armchairs in the entrance hall in one circle and Astrid told us about the history of the Giant’s Causeway as this would be our target of the next day. 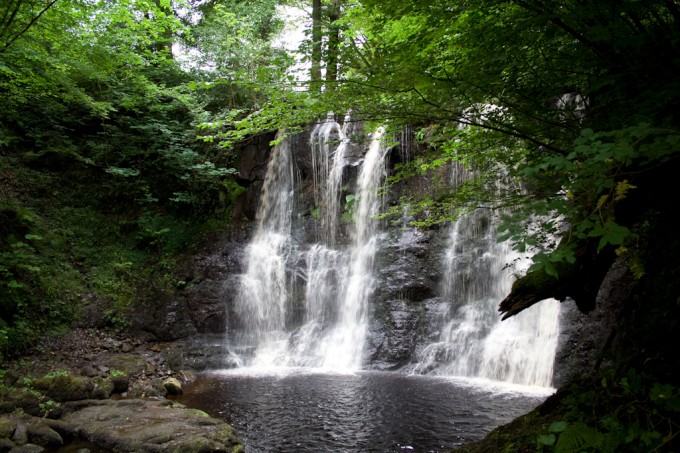