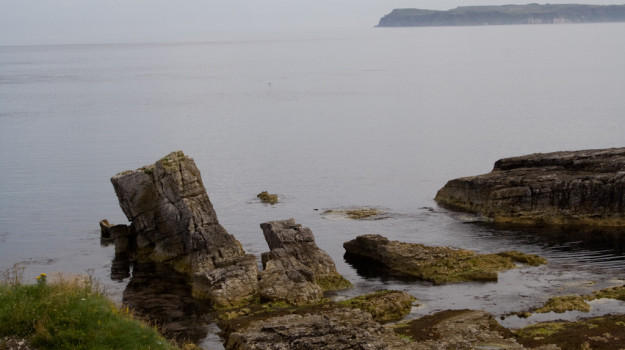 On the morning of the 15th of July we had to pack our things again as we would spend that following night in Derry. But this day we would be wandering along the coast to the Giant’s Causeway, something I have wanted to do for years and never managed to.

Our shuttle picked us up at the hotel and drove us until Ballintoy where he droped us out and kept our luggage. From Ballintoy on we could be walking completely along the coast and the shuttle would pick us up again at the Giant’s Causeway and get us to Derry.

The first part went along a wonderfull beach which was called the White Park[nbsp] Bay. Luckily it was low tide, because I’m not so sure if we could have been walking there otherwise. The beach and it’s sand were mainly the reason for the low speed of the group that day. We had wonderfull blue sky and we were really slow. For my part I have to admit it is hard to walk in the sand for kilometers as I often had the feeling we weren’t moving at all, but this was maybe just a trick of the horizon in general. When we reached Portbradden it was already noon I think. There is the smallest church of Northern Ireland which doesn’t look like any church I have seen before and more like a small cottage with bells.

From Portbradden on we went uphill as the rest of the tour should be on the top of the cliffs. On the cliffs we had a perfect view, blue sky and water and a sun that was trying to burn us alive. Sunblocker was of no use as we were sweating in the sun and I finally realized for the first time that a half liter of water might not be enough for a tour like that.

Our target was the Giant’s Causeway so I will try to tell a little about the origins of it. Legends tell that this was originally a causeway to Scotland built by a giant named ionn Mac Cumhaill. Fionn was the only giant in Ireland with quite a famous possition and he heard that in Scotland was a giant as well. So Fionn built the causeway and walked over by night to have a look at the Scotish giant. When he saw him he was shocked that the Scotish one was even bigger than himself and he flew back to Ireland. The Scotish giant saw the causeway and thought exactly the same as Fionn, so he walked over to Ireland to see the Irish giant. When Fionn hat returned home and told his wife how big the other giant was his wife had a very clever idea. She dressed her husband in baby clothes and laid him on the beach. So when the Scotish giant arrived in Ireland he found a „baby“ at the beach and he was anxious by thinking..“if the babys are that big here..how may the grown ups be?“. So he flew back to Scotland and destroyed the Causeway so that the big giants from Northern Ireland were not able to follow him. No need to say that intelligence has nothing to do with height.[nbsp]

As I was so keen on seeing the Giant’s Causeway I was pretty much dissapointed when we got there. It was terribly crowded and there wasn’t even one place where I could have made a photo without people on it…so meanwhile I think the best time to see the Giant’s Causeway is the early morning (really early) when there are more or less no people around.

The bus picked us up at 4.30 p.m. and drove us to Derry where we stayed in the City Hotel which was quite modern and huge compared to our previous hotels. But in my room was a bathtub and that’s something I don’t have at home. Burnt from the sun my first action was to take a longer bath which was absolutely relaxing.

Dinner was really good, but if I think about it nowadays I can not say that this was the best hotel we had. It was the one with the most ameneties, but it was not really personal. After dinner we decided to make a short walk on the city wall, as Derry is also called „The Walled City“ and then directly ended up in a pub named Peadar O’Donnells which I can absolutely recommend! 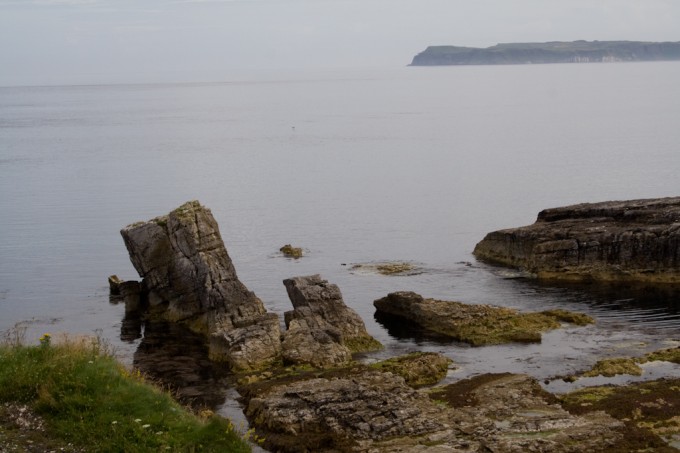 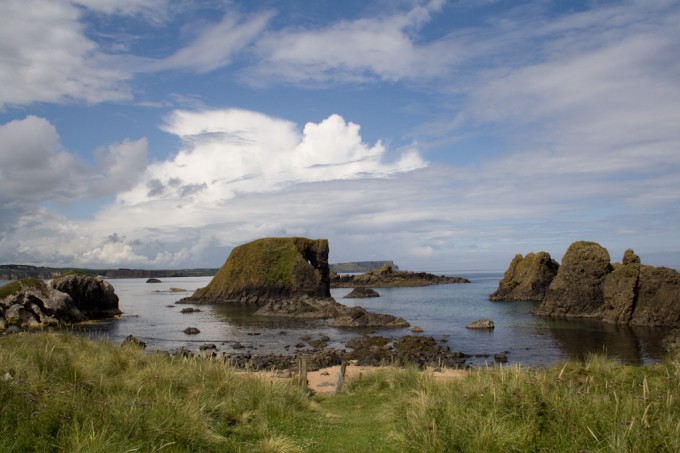