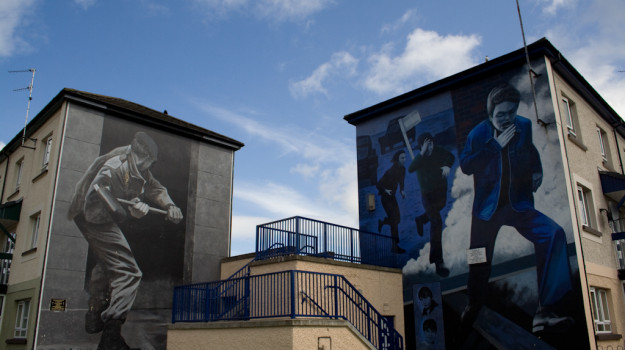 On Thursday we had no hiking tour. Astrid offered us an extended city tour where she explained a lot about the history of the city[nbsp] and the civil war in Northern Ireland, where it is called „the troubles“. Luckily that day again we had wonderfull weather.

The tour started after breakfast on the Bogside of Derry. The Bogside is a district of Derry outside the city wall and has been the center of the troubles in Derry, for example the Bloody Sunday took place here. Something one just can’t ignore on the Bogside are the Murrals. These are house paintings, normally covering a complete side of a house. All Murrals refer or remind of the Troubles, so that they often cover special days or victims of that area.

There is a Murral with two persons dressed in blankets which for example tells the history of the political prisoners at the time of the Troubles. To protest against the imprisonment they started a hunger and hygiene strike and even the dressing of normal prison clothes was rejected, so that they were neglected, haggard and dressed in their blankets.

Another Murral is showing[nbsp] a demonstration for civil rights and so refers to the starting point of the Troubles. The Catholic was confronted with drawbacks compared to the Protestants. They had problems in getting higher qualified jobs and were not allowed to study in Northern Ireland. Districts like the Bogside were districts were mainly the poorer and almost only Catholic lived, so a demonstration for equality of treatment was the starting point of the Troubles.

The demonstrations soon were accompanied by violence from both sides. The demonstrating part threw stones against the armee and the armee normally took teargas to destroy the demonstration. This culminated in the Bloody Sunday, on the 30st of January 1972, where the British armee started to shoot on the demonstrators and 14 persons were deadly injured.

From the Bogside we climbed up the stairs to the city wall, where we had an absolutely perfect view over the whole Bogside. In general Derry is really a beautiful city. The city wall, that goes around the inner circle of the city is perfect for a walk around, but even here one can not ignore the Northern Ireland conflict. On the side of the Bogside the city wall is still often covered with high fences, that are still left over from the Troubles area. Those have been attached to the city wall to prevent the demonstrators to throw up Molotov cocktails and paint bombs into the inner circle. But even with this high fences it seems they somehow managed to do so because if you walk along that part of the city wall there are some houses that are covered with colour dots.

Directly along the city wall there is the biggest anglican cathedral of Northern Ireland. St. Columb’s Cathedral which has been built between 1628 and 1633. I have to admit that I was really surprised to see flags hanging down from the church ceiling that were looking as if they had been put there some hundred years ago. The Cathedral also keeps the keys to the four city gates, which are embedded into the city wall.

After we had left the Cathedral we made a short walk through the historic center and afterwards the rest of the day was completely ours.. Some of us started for a shopping tour and unfortunatly I have to admit that shopping makes much more sense and fun in Dublin. Derry is almost covered by huge shopping centers and that’s not the kind of stores I was looking for. So when we returned to the hotel I actually had bought nothing if I remember right.

The day ended again in that nice pub we had discovered on Wednesday. 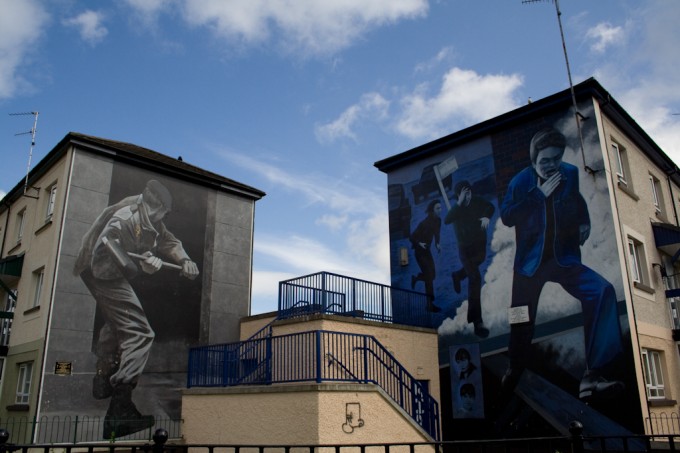